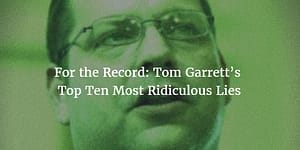 Just this week, Garrett claimed to the Lynchburg News & Advance editorial board that the Freedom Caucus “likely isn’t in his future.”

But days earlier the newspaper reported again on Garrett’s pledge to join the Freedom Caucus. “During the nomination contest, Garrett committed to joining, if asked, the Freedom Caucus — a group of about 40 hard-right Republicans who have proudly disrupted congressional business.”

Speaking in Madison County on October 5, 2016, Garrett repeatedly declared that he “absolutely would support shutting the government down.” (see video)

Additionally, in a March 28, 2016 blog post endorsing Senator Garrett, Virginia Right noted, “Tom told me recently and it was for publication that he WILL join the Freedom Caucus if elected.”

Despite Garrett’s unrelenting commitment to Tea Party and Freedom Caucus objectives, he callously misleads reporters, editors, and the public in an attempt to mask his true intentions and beliefs.

“He is frighteningly adept at changing his story at a moment’s notice depending on his audience.  He seems to have no moral qualms about deliberately and callously misleading his audience,” said Campaign Manager Tom Vandever. “Despite his rhetoric about the importance of adhering to core principles, it appears that his only core principle is saying whatever he thinks people want to hear in order to get elected.”