Was last weekend a trial balloon for a coup?

Was last weekend a trial balloon for a coup?

The Guardian is reporting (heavily sourced) that the “mass resignations” of nearly all senior staff at the State Department on Thursday were not, in fact, resignations, but a purge ordered by the White House. As the diagram below (by Emily Roslin v Praze) shows, this leaves almost nobody in the entire senior staff of the State Department at this point.

[intense_blockquote]
“Yesterday was the trial balloon for a coup d’état against the United States,” writes Yonatan Zunger on Medium. The “administration is testing the extent to which the DHS (and other executive agencies) can act and ignore orders from the other branches of government. This is as serious as it can possibly get: all of the arguments about whether order X or Y is unconstitutional mean nothing if elements of the government are executing them and the courts are being ignored.”
[/intense_blockquote]

The article points out another point worth highlighting: “In the past, the state department has been asked to set up early foreign contacts for an incoming administration. This time however it has been bypassed, and Trump’s immediate circle of Steve Bannon, Michael Flynn, son-in-law Jared Kushner and Reince Priebus are making their own calls.” 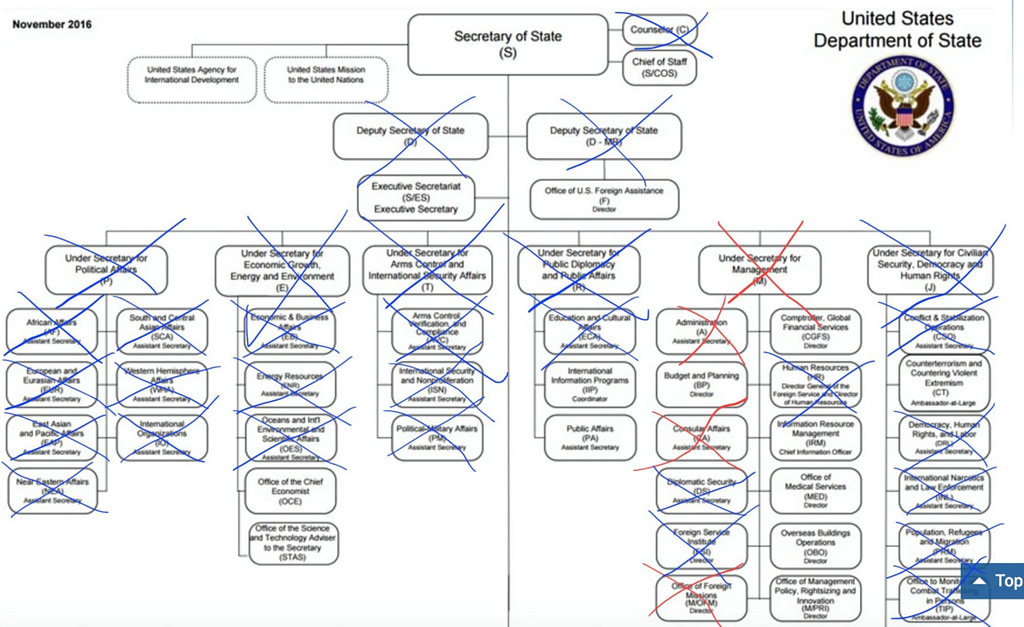 The seniormost staff of the Department of State. Blue X’s are unfilled positions; red X’s are positions which were purged. Note that the “filled” positions are not actually confirmed yet.

On Wednesday, Reuters reported (in great detail) how 19.5% of Rosneft, Russia’s state oil company, has been sold to parties unknown. This was done through a dizzying array of shell companies, so that the most that can be said with certainty now is that the money “paying” for it was originally loaned out to the shell layers by VTB (the government’s official bank), even though it’s highly unclear who, if anyone, would be paying that loan back; and the recipients have been traced as far as some Cayman Islands shell companies.

Read the rest at https://medium.com/@yonatanzunger/trial-balloon-for-a-coup-e024990891d5#.eo1yprton

Trump: If we have nuclear weapons, why can't we use them?

MSNBC’s ‘Morning Joe’ host, former Republican congressman Joe Scarborough, recalled an incident live on air in which he claimed “several months ago, a foreign policy expert went to advise Donald Trump and three times he asked about the use of nuclear weapons.”

Scarborough made the comment in a discussion about why Donald Trump does not have any foreign policy experts advising him. Former CIA Director Michael Hayden was asked who in the intelligence community is advising Trump, to which Hayden responded, ‘no one.’

Scarborough added he was told that Trump specifically asked, “‘If we have nuclear weapons, why can’t we use them?'” Scarborough’s co-host, Mika Brzezinski ended the segment, in which the other panelists appeared genuinely shocked, saying “Be careful America, and be careful Republican leaders, your party is blowing up.”