In 1903 the Marxist Russian Social Democratic Labor Party broke into two competing factions, as often happens with such movements. This was a bit confusing for everyone, so in an effort to delineate between the two factions people starting calling one the “hard” faction and the other the “soft” faction. Vladimir Ilyich Lenin didn’t find that very useful however, particularly since he was leading the faction being called hard. So in a ballsy propaganda move he told everyone to refer to his own faction as the “Bolsheviks,” from the Russian word for majority. In essence, Lenin was telling people to call his faction the “majoritarians.” And while he was at it he named the other faction “Mensheviks,” which of course means “minoritarians.”

As you may have already guessed, Lenin’s faction was not really the majority. The “Mensheviks” were actually the majority as often as not, and pretty much everyone knew it. Lenin didn’t consider that a problem however. On the contrary, it was exactly the reason he came up with the names. And it worked, because people quickly began to use his new names. Astonishingly, even the “Mensheviks” used the new names!

The votes are still being counted, but Clinton’s popular vote lead is already over 2.5 million. This is because Trump won a number of critical states by only a few hundred thousand votes, while losing others like California and New York by millions. These vote tallies lead to three very troublesome facts: 1) A lot more Americans voted for Hillary Clinton than Donald Trump. 2) Hillary Clinton actually received more votes than any man who has ever run for president except Barack Obama. 3) Donald Trump won this election with one of the worst vote margins in American history. In fact only two presidents have ever won the presidency with worse vote margins: Rutherford Hayes in 1876 and John Quincy Adams in 1824.

It follows therefore that the larger the majority you represent, the greater your mandate. And while a “mandate” is technically nothing more than an official commission to do something, the term has come to have a meaning more aligned with those greater majorities. Which is to say, in common use a “mandate” is considered to be a type of unique political authority earned when a politician or party wins a landslide victory.

Clinton vs Trump—Seth Myers Asks ‘How Do You Choose?’

With polls tightening with less than two days left, Seth Myers asks ‘what’s the difference between Trump and Clinton anyway?’

What’s the difference between Trump and Clinton anyway? https://youtu.be/9v97xH6Bof0

Posted by Late Night with Seth Meyers on Wednesday, November 2, 2016

With no reservations, I support the election of Democrat Jane Dittmar to Congress.

From 1990 until 2002, I was an elected Republican and served two terms as chairman of the Albemarle County Board of Supervisors. I believed in the Republican Party’s ethics of small government and support of small business. I attempted to live out these values in my votes on the Board of Supervisors and my prior 10 years of service and service years as chairman of the Albemarle County Planning Commission.

We have had enough of Republican obstructionism. We need Jane, with her small-business background and mediation skills, representing us and breaking through the gridlock in Washington to get things done.

Editorial: Bury Trump in a Landslide

Never have we questioned a candidate’s fitness to serve.

The 16-month campaign since Trump vaingloriously entered the race has horrifyingly revealed that the Big Lie brazenly told — built on smaller falsehoods and spread by social media and a lust for TV ratings — can bring the United States to the brink of electing an aspiring strongman with no moral bearing or self-control.

But, now, with his defeat all but certain, Trump is conjuring for his followers demons that conspire to destroy them and the nation.

Chillingly, he refused in Wednesday night’s debate to commit to honoring the results of the November election. Doing so, he questioned the fundamental soundness of America’s democracy.

News to America: Bury Trump in a Landslide

Daily News Editorial: Bury Trump ina Landslide When deliberating over a presidential endorsement, the Daily News Editorial Board strives to identify the person who offers the greatest promise to brighten the futures of Americans and to safeguard the national security. Never have we questioned a candidate’s fitness to serve.

Boom Boom, Out Go The Lights (for Donald Trump)

You know your party’s in trouble when your candidate is even too extreme for this nut job. 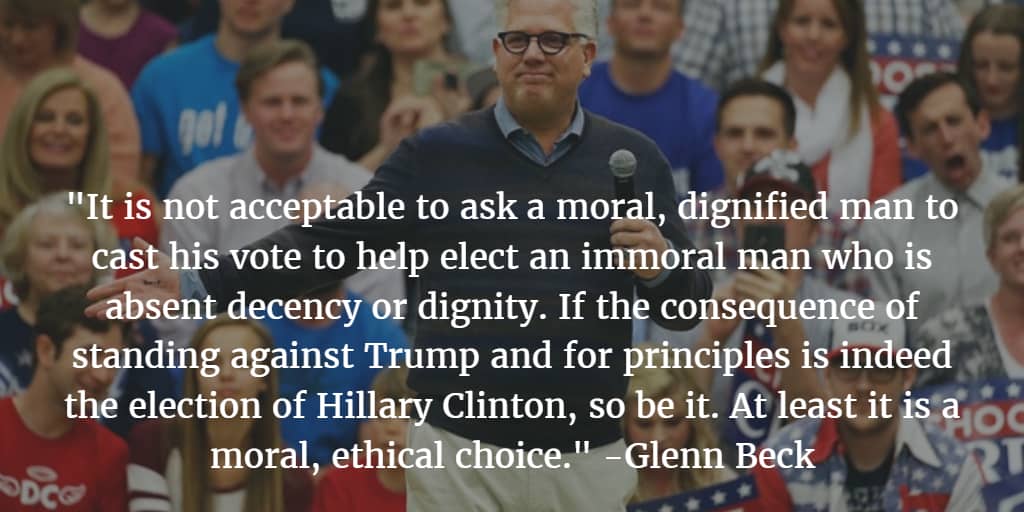 “If one helps to elect an immoral man to the highest office, then one is merely validating his immorality, lewdness, and depravity.”