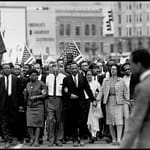 Eliza Gilkyson’s latest video, set to her song “the Great Correction,” features a collection of powerful photos depicting the brave souls who, throughout this nation’s history, fought for a decent society and a protected and loved planet.

“These women are from different states and never met till today. They practiced this song online. I was crying the whole time I filmed this. Show them some love.” ~Alma Har’el

These women are from different states and never met till today. They practiced this song online. I was crying the whole time I filmed this. Show them some love. #WomensMarch #ANTHEM #Icantkeepquiet #TogetherWeRise

Coretta Scott King’s Lost Letter to the US Senate

The lost letter from Martin Luther King, Jr.’s widow opposing Jeff Sessions for a federal judgeship in 1986 has been found, and it’s a doozy..

“The irony of Mr. Sessions’ nomination is that, if confirmed, he will be given life tenure for doing with a federal prosecution what the local sheriffs accomplished twenty years ago with clubs and cattle prods. Twenty years ago ago, when we marched from Selma to Montgomery, the fear of voting was real, as the broken bones and bloody heads in Selma and Marion bore witness. As my husband wrote at the time, it was not just a sick imagination that conjured up the vision of a public official, sworn to uphold the law, who forced an inhuman march upon hundreds of Negro children; who ordered the Rev. James Bevel to be chained to his sickbed; who clubbed a Negro woman registrant, and who callously inflicted repeated brutalities and indignities upon nonviolent Negroes peacefully petitioning for their constitutional right to vote”

Obama: We Will Educate Trump

Addressing the Congressional Black Caucus gala for the last time as president, Obama warned that while his name would not be on the ballot in November, all of the progress that the country has made over the last eight years was on the line.

“If I hear anybody saying their vote does not matter, that it doesn’t matter who we elect — read up on your history. It matters. We’ve got to get people to vote,” Obama said. “I will consider it a personal insult — an insult to my legacy — if this community lets down its guard and fails to activate itself in this election. You want to give me a good sendoff? Go vote.”