The true impact of activism may not be felt for a generation. That alone is reason to fight, rather than surrender to despair 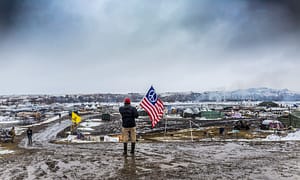 Hope is a belief that what we do might matter, an understanding that the future is not yet written. It’s informed, astute open-mindedness about what can happen and what role we may play in it. Hope looks forward, but it draws its energies from the past, from knowing histories, including our victories, and their complexities and imperfections. It means not being the perfect that is the enemy of the good, not snatching defeat from the jaws of victory, not assuming you know what will happen when the future is unwritten, and part of what happens is up to us.
[intense_blockquote color=”muted”]
To know history is to be able to see beyond the present, to remember the past gives you capacity to look forward as well, it’s to see that everything changes and the most dramatic changes are often the most unforeseen.
[/intense_blockquote]

We are complex creatures. Hope and anguish can coexist within us and in our movements and analyses. There’s a scene in the new movie about James Baldwin, I Am Not Your Negro, in which Robert Kennedy predicts, in 1968, that in 40 years there will be a black president. It’s an astonishing prophecy since four decades later Barack Obama wins the presidential election, but Baldwin jeers at it because the way Kennedy has presented it does not acknowledge that even the most magnificent pie in the sky might comfort white people who don’t like racism but doesn’t wash away the pain and indignation of black people suffering that racism in the here and now. Patrisse Cullors, one of the founders of Black Lives Matter, early on described the movement’s mission as “rooted in grief and rage but pointed towards vision and dreams”. The vision of a better future doesn’t have to deny the crimes and sufferings of the present; it matters because of that horror.

Last month, Daniel Ellsberg and Edward Snowden had a public conversation about democracy, transparency, whistleblowing and more. In the course of it, Snowden – who was of course Skyping in from Moscow – said that without Ellsberg’s example he would not have done what he did to expose the extent to which the NSA was spying on millions of ordinary people.