We the People: public art for the inauguration and beyond 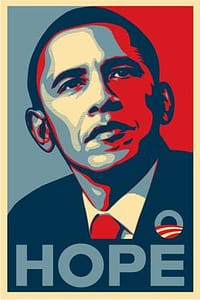 Eight years ago, the artist Shepard Fairey made the iconic image that captured a period of HOPE in America. Today we are in a very different moment, one that requires new images that reject the hate, fear, and open racism that were normalized during the 2016 presidential campaign. So on Inauguration Day, We the People will flood Washington, DC with NEW symbols of hope.

Much of Washington will be locked down on Inauguration Day, and in some areas there will be severe restrictions on signs and banners. But we’ve figured out a hack. It’s called the newspaper! On January 20th, if this campaign succeeds, we’re going to take out full-page ads in the Washington Post with these images, so that people across the capitol and across the country will be able to carry them into the streets, hang them in windows, or paste them on walls.

https://www.kickstarter.com/projects/amplifierfoundation/we-the-people-public-art-for-the-inauguration-and
Join artists Shepard Fairey, Jessica Sabogal, and Ernesto Yerena as we disrupt the rising tide of hate and fear in America.

Every dollar you put into this campaign will buy six ads printed and distributed for us.

Amplifier will also distribute these images as large placards throughout DC at Metro stops, out the back of moving vans, at drop spots to be announced in the coming week via our social media feeds, and, on January 19, as free downloads for you to print and share as you like.