Voter registration is the antidote to voter suppression 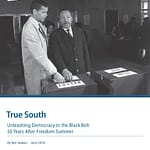 The Freedom Summer activists understood that politics is at least in part a numbers game. We need to realize that communities of color have the potential to shift the balance of power in the U.S South through sheer force of numbers. Voter registration can make the future come faster in the Black Belt, and 50 years after Freedom Summer, it is time for another bold leap forward.

Voter registration is the antidote to voter suppression

We have the antidote to voter suppression. In fact, we’ve always had it. We have known what it is for at least half a century. Fifty years ago this month, Freedom Summer activists risked life and limb to register voters in Mississippi and spread the gospel of democracy across the southern United States.