Our nation needs a leader to ‘turn on the lights’ 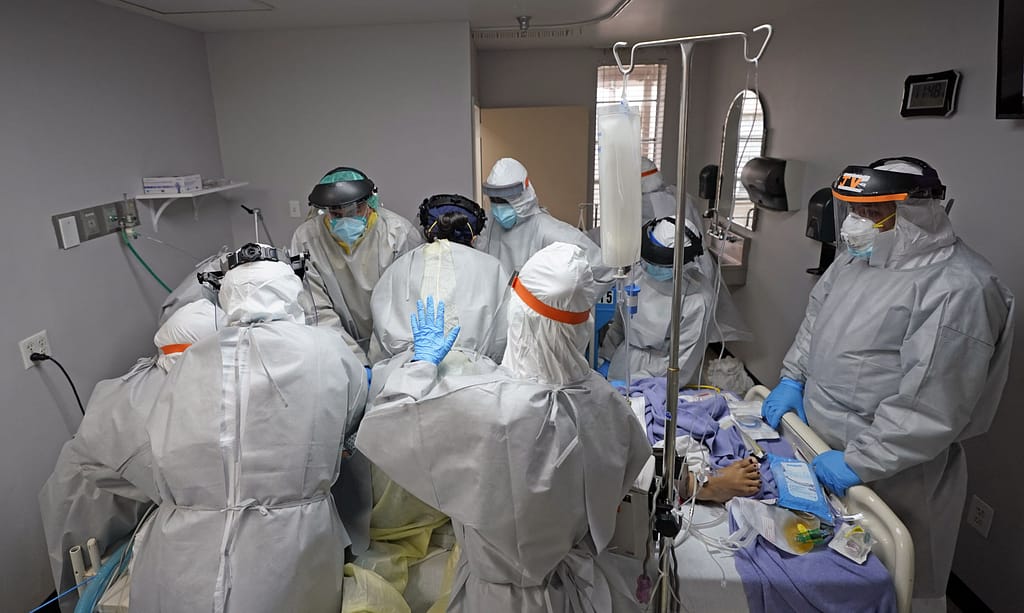 FILE – In this July 6, 2020, file photo, Dr. Joseph Varon, right, leads a team as they try to save the life of a patient unsuccessfully inside the Coronavirus Unit at United Memorial Medical Center in Houston. America’s failure so far to contain the spread of the coronavirus as it moves across the country has been met with astonishment and alarm on both sides of the Atlantic. (AP Photo/David J. Phillip, File)

In the darkest days of the Great Depression, after the stock market crashed, half the banks had failed and 15 million people were out of work as the economy bottomed out, President Franklin Delano Roosevelt acted boldly to address the uncertainties and fear that gripped people. He united Americans.

Today, we are struggling with a situation similar to, but in some ways worse than, what was faced by FDR. Thanks to the worldwide pandemic and the administration’s response, not only are more than 30 million people out of work, but more than 180,000 are dead. Instances of police brutality have sparked nationwide protests.

Instead of promoting unity, however, President Donald Trump on Fox News’ Laura Ingraham show recently talked of people in the “dark shadows” who are “controlling” presidential candidate Joe Biden and “thugs” in dark clothing flying into Washington, D.C., to stage violence. On the same show, he claimed, falsely, that Portland, Oregon, had been burning for years.

Asserting that America has descended into chaos and its cities are burning, Trump wants us to forget that if this is true, it is happening on his watch.

To anyone old enough to remember the 1967 Detroit riots, the unrest that followed the 1968 murder of the Rev. Martin Luther King Jr., or the 1992 police beating of Rodney King, today’s Portland and Kenosha events barely register on the chaos scale.

Trump’s insertion of multi-agency federal troops and mercenaries inflamed these situations, not only in Portland but also right across from the White House at St. John’s Church near Lafayette Square. None of his actions have contributed to public safety.

And what are we to make of Trump, or Culpeper’s Jon Russell, implying that Black Lives Matter marches cause suburban women and children to quake in fear? This is an old dog whistle, which was employed by racist real-estate agents and bankers in the 1950s and ‘60s to keep minorities out of white neighborhoods.

Most of Culpeper’s neighborhoods are a rich combination of races, creeds, ages, and political viewpoints. Today’s “suburbanites” are nothing like those of 70 years ago.

This summer’s Black Lives March in Culpeper and hundreds more in cities and towns all across American were nonviolent examples of our right to peaceably assemble, guaranteed by our Constitution.

Some who may have been fearful appeared to be the St. Louis couple who brandished firearms at peaceful marchers as they passed their door and the 17-year-old in Kenosha who killed two protesters and wounded a third, in cold blood. The St. Louis couple was made heroes at the Republican National Convention. And Trump has defended, rather than condemned, 17-year-old Kyle Rittenhouse.

Many parents have had to deal with their children’s fears of “monsters under the bed.” The patient parent turned on the lights to show that there was nothing there.

Now, America needs a responsible adult in the Oval Office who will “turn on the lights” and express empathy, inspire hope and faith in the future, and marshal the nation’s considerable resources to defeat the pandemic, attack racial and economic inequities, and restore America’s place in the world.

In contrast to Republican assertions, Joe Biden has responded to these crises as a unifier who understands the need to govern for the common good. He recently remarked, “I want a safe America, safe from COVID, safe from crime and looting, safe from racially motivated violence, safe from bad cops.”

Vote like your lives depends upon it because they do.

David Reuther, a retired U.S. Foreign Service officer, is past chair of the Culpeper Democratic Committee. These are his personal observations.