Not just falsehood by falsehood, but as the defining feature of his presidency. 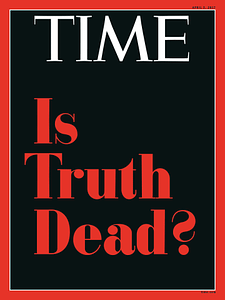 Donald Trump is not on the cover of Time this week, and that must gall him. The president is the subject of the magazine’s cover story, the promise of which apparently persuaded him to grant it an exclusive interview. But instead of Trump’s visage, the cover features a single three-word question in bold red type: “Is Truth Dead?”

The question on the magazine’s cover refers to Trump’s apparent ability to lie, dissemble, and distract from the truth—and to not only get away with it but to ride those lies to the world’s most powerful office. The story within by Time’s Washington bureau chief, Michael Scherer, rightly takes Trump’s dishonesty as its premise, then asks: How exactly does it work, and why, and can it possibly keep working now that he’s president? It’s a good story, thoughtful and—though Trump would never admit it—fair in the sense that it examines its subject’s penchant for prevarication without exaggerating, distorting, or moralizing.

“It isn’t that Time, the Wall Street Journal, and others haven’t confronted Trump on specific claims. They have, of…